On Friday last I walked the Greystones to Bray cliff path for the first time in a year. This is a highly accessible route by public transport and only requires a reasonable level of fitness - ie you need to be ok to walk for about 90 minutes to 2 hours and there are a couple of sets of steps in the middle which are quite deep and not kind to dodgy knees. It is mostly flat, with a low gradient slope at each end. The walk is approximately 7k but if you are travelling by DART there is a little extra walking at each end. The train takes under an hour from Dublin city centre and 40 mins back from Bray.

Many consider it the Bray to Greystones path, but I prefer to start in Greystones, further South, for a number of reasons.  Walking northwards means the sun isn't in your face. More importantly, the DART (Dublin coastal & city centre train) back to the city is more frequent from Bray so I don't even bother checking train times home in the early evening, whereas from Greystones you are better off knowing when to turn up at the station. The path is closer to the coast at Bray so the view as you finish is much more breathtaking. Lastly, you have a greater choice of watering holes and eateries close together on the bustling seafront at Bray. (One of these days I will do Bray to Greystones and back again!!)

My friends and I like to take a little detour at the start of this walk, turning left (South) outside the dart station in Greystones instead of right, grabbing a coffee to go and walking a few yards to the beach for a quick picnic. Then we walk back along the beach and ascend some steps at the North end of the strand onto a paved coastal walk that takes you to the new harbour and marina, which seems to be almost finished now. 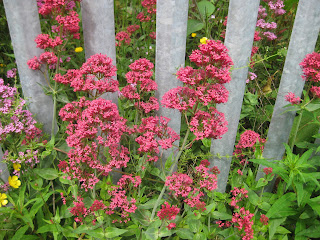 Keep following the natural line of the pavement (sidewalk) as it curves to the left until you are directly across the road from a pub and to your right you will catch the new access to the cliff path, running alongside a fish n chip cafe.  This is a new start since last year and very even underfoot. The beginning of the route has a fence on one side and doesn't yet afford a clear view of the sea for several minutes. However at this time of year at least, the pathway is a riot of colour, lined with pink, red and yellow wildflowers. I made a mental note to check if I have beads or buttons to match these hues so I can use them as inspiration for some summer jewellery.

Shortly, the path opens out into lush green land with a view of the low hill, Bray Head, straight ahead of you. Look behind you and you can catch a glimpse of Greystones strand. The way gets gradually steeper as it winds higher towards the side of the cliff. At some points the path narrows and is lined with nettles and brambles, so shorts are not a great idea!


Eventually you reach the cliff side with refreshing views of the open sea and the winding rail track below. This older section of path is still fairly even, though some parts are narrower and rockier.  At no point are you teetering at the cliff edge as you are at points in Howth, at the other end of the same DART line. (Future post yet to come.)

My favourite section is when the path turns a corner and you see the tunnel 'eyes' watching you. The outer train tunnel is the original one but the track was moved a little more inland following an accident in 1869. Read  more about these tunnels in my previous post HERE.

Closer to Bray there are a couple of exits off and upwards where you can gain access to Bray Head if you want  a steeper challenge and a longer walk. This hill is not very high, but many find it very steep, especially on the way down. (I bent back and broke a toenail rather painfully on the way down last year and chickened out of climbing it again.) The cliff path ends up next to the Bray access and car park for the the hill walk and the road winds down to the seafront where you can find refreshments.
It took us a little over 2 hours from when we landed on the beach with a couple of pit stops for a quick bite to eat and several photo stops. Walking at an easy pace without lunch stops should take perhaps 90 minutes. If you are driving, you can park at Greystones Harbour or Bray seafront and take the Dart back to your starting point.

Now I'm off to find some beads to match those flowers......