The Willow pattern is probably one of the most widely recognised designs in ceramics. Also known as the Blue Willow, it's an elaborate design based on a Chinese story. The term 'Willow' refers to the pattern itself plus the manner in which it is printed on ceramic, that is, Transferware.

Willow has been around for over 200 years. There are and have been several variations of the pattern produced since circa 1780-1790. Inspirations came from Chinese designs but the key European players involved in developing this style of household ceramics were Josiah Spode, Thomas Minton and Thomas Turner. 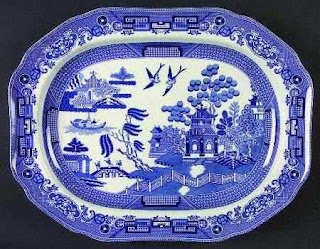 The background in Willow pattern is always white. The foreground is most commonly blue but other shades such as brown, pink or green are also found.

My grandmother had a brown set. When she married, my mother had an entire, breakfast, tea and dinner service in the popular blue as part of her dowry, so I am well familiar with the design. As a small girl I was enchanted by the fable behind it.

THE STORY OF THE WILLOW PATTERN:
A humble assistant named Chang fell in love with the Chinese Mandarin's daughter, Koong-Se. He was forbidden to marry the beautiful young lady as he was of a lower station and she was already promised to a wealthy nobleman. In order to keep them apart until her wedding, the Mandarin locked his daughter in a small house in an orchard overlooking the river. However, the brave Chang came to Koong-Se's rescue. The young lovers escaped across a bridge and eloped to a secret island. They spent many happy years together in self-imposed exile. However, the jilted nobleman eventually caught up with the couple and had them slaughtered. But the Gods took pity on the lovers and turned their souls into a pair of doves. They flew away, free to be together in happiness.

When I saw this piece of sea pottery I recognised it as a section of border on a Willow pattern piece similar to the version my mother had.  I suspect that the slightly concave shard came from a saucer or serving dish perhaps. (The sea pottery pendant I made with it has been sold.)

Although there are several variations of the Willow pattern, elements common to them are three people crossing the bridge, the willow tree, the apple tree, the temple, the fence and essentially, the two birds flying overhead. Some versions are more stylised, some more flouncy. 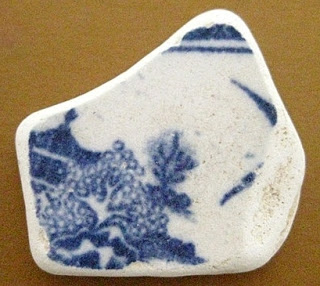 I recently found this shard of sea pottery on a Dublin strand. You can see the smaller rooftop and the trees, most often found on the top left of a piece. On the right, you can make out the tips of the wing and tail of one of the birds which would commonly be in the top centre of the pattern. 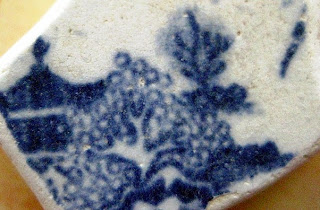 This was a very exciting find. It has been beautifully leached and de-glazed by the acidity and action of the ocean. It has that 'chalky' texture that comes only after a long time tumbling in the sea. The colour is a little faded but still quite a true, indigo blue. I shall put a lot of thought into it before wrapping it in silver wire. The trick will be to show off as much of the pattern as possible while holding the piece securely - that's the kind of wire-wrapping challenge I relish. However, I am sorely tempted to leave this piece as is and keep it in my personal collection.