It's no secret that the colourful and varied landscapes of Ireland have long inspired painters, poets and artisans. Even Irish jewellery artists like me garner ideas from what we see, smell and hear.

The idea for these Connemara marble and purple and black glass earrings came from my trips to the bog lands in Co, Offaly, near where my mother was reared.


Much of the midlands bog areas of Offaly and Laois and the green mountains throughout Ireland are covered in a riot of purple heather. 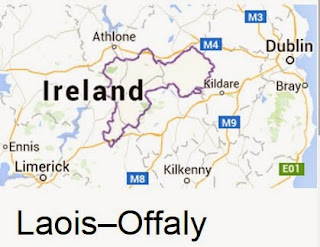 The black seed beads used in the earrings design are there as a nod to Irish bog oak. This is ancient oak that has been preserved and naturally blackened in the peaty earth of the bogs. In the 1800s bog oak was used to make black mourning jewellery. I have yet to find a piece of usable bog oak myself, but if I ever do it will be fashioned into a very special piece. In the meantime, you will just have to make do with this increasingly rare and very beautiful Irish marble....... 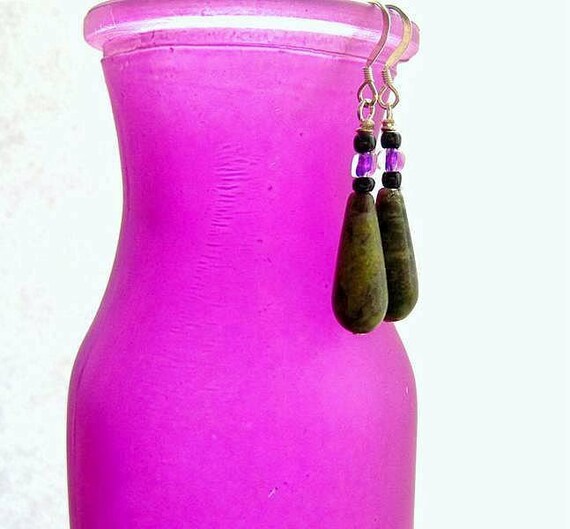 Posted by Unknown at 3:01 PM No comments:

Although my Irish jewellery is contemporary in design, much of the inspiration comes from the ancient Celts or traditional folklore.


An idea was tucked away at the back of my mind to make a pendant inspired by the Irish legend , 'Clann Lir' or 'The Children of Lir' as it is called in English. I knew it had to involve indigenous, Connemara marble and sterling silver.

LEGEND OF THE CHILDREN OF LIR

True of many an Irish tale passed from generation to generation, there are several variations of this ancient story.

As one version goes, Nobleman Lir and his wife Aobh had 4 beautiful children, a girl named Fionnuala and 3 boys. Aodh, Fiachra and Conn. Tragically, Aobh passed on too soon and the young children were left without a mother. Aobh's father, King Bodb, wanted to keep Lir content so he sent his other daughter, Aoife, to take her sister's place.


Aoife soon grew jealous of the bond shared by her step children and her new husband. She contrived to have the siblings killed but her servant refused to carry out the ugly task. So instead, Aoife magically turned them into swans, bound together by chains of silver and doomed to swim the lakes and seas of Ireland for 9 centuries. She gave them one gift, singing voices more beautiful and enchanting than that of the lark. The spell would only be broken if the silver chains broke at the toll of a sacred bell


Eons passed and the child swans survived many adventures, battling the waves of the ocean and beating the cold of the deep lakes. They became famed for their charming singing. Eventually the four found solace at a peaceful monastery. However Deoch, wife of the King of Leinster, wanted to take possession of these beautiful swans so they could sing to her and her alone. She demanded her husband capture them.

During the melee to grab the birds, the monastery bell tolled. At that very moment, the sharp blade of a sword accidentally severed the silver chain that bound them. In an instant, the spell was broken but the children were shocked to discover they had lost their youth and were almost 1000 years old and very withered. No time passed before they moved on to the next world. There however, they were happily reunited with their beloved parents.

Recently I stole a quiet half hour to form a few Celtic spirals from solid sterling silver wire. It occurred to me that the shape can turnout swan-like, if the loose end is left long and graceful. To remain true to a Celtic spiral shape, the charm does need to remain fairly rounded, however.
A few strategic taps with a chasing hammer on an anvil perfected the shape while hardening the metal. I then used the round end of the hammer head to add bevelled texture, which catches more light. 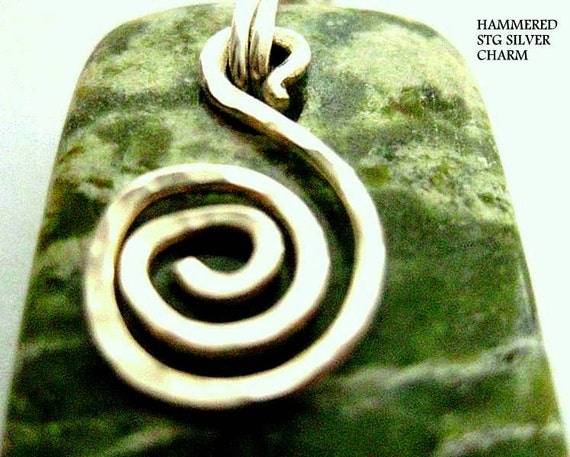 A swan is born! I wire wrapped the charm onto this gorgeous, one of a kind, slab of Connemara marble, cut by a Galway mason. Occasionally I hang my pendants on velvet or crochet chains. In keeping with the legend, Lir pendant could only be hung upon a silver chain.

Click here to read the story of the Irish Claddagh symbol

Click here to learn how to make a Celtic spiral charm
Posted by Unknown at 11:01 AM 2 comments: